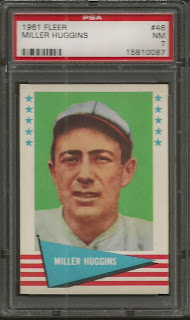 Card #87 in the 1961 Fleer Baseball Greats set is another Cub – Hack Wilson. Wilson is known for his combative style and for his heavy drinking. But even with these faults, Wilson (for a short period) was one of the greatest hitters that baseball has ever known. If not for his life style, he might have been an equal to Babe Ruth.

Wilson’s 1930 season for the Cubs still ranks as one of baseball’s greatest hitting seasons. Hack Wilson hit 56 HRs with 191 RBI and a batting average of .356. The 56 home runs stood as the NL record for many years and the 191 RBI is still the record.

Wilson’s MLB career ended in 1934 at the age of 34. After a number of business failures, Wilson who was once the highest paid player in baseball, died penniless. Ford Frick, sent money to cover his funeral and the gray suit that he was buried in was donated by the funeral director. Hack Wilson died in 1948 only a few months after Babe Ruth.

Wilson was named to the Hall of Fame in 1979 by the Veteran’s Committee.

For anyone interested in learning more about Hack Wilson and his great 1930 season, there is a book titled Hack’s 191 by Bill Chastain that covers the season in detail. This book is well worth your time if you have an interest in the history of baseball. 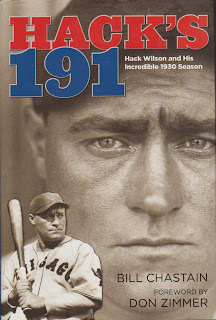 Luque became a very good mentor in his later playing years and became a pitching coach for the Giants after his career ended. 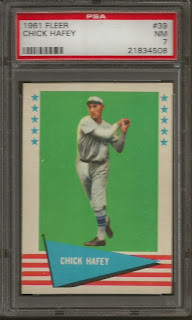 Hafey was a line drive hitter who hit for average. His career batting average was .317. Hafey won the NL batting title in 1931 by just .0002 over Bill Terry and .0007 over Jim Bottomly. It took a hit in Hafey’s last at bat to secure the title. This batting race still ranks as one of the closest in history.

Hafey was traded to Cincinnati as a result of a salary dispute with Branch Rickey. Hafey played 13 years and was elected to the Hall of Fame in 1971 by the Veteran’s Committee. 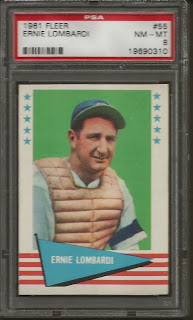 I picked up a PSA 8 version of the 1961 Fleer #55 Ernie Lombardi. Lombardi’s most productive years were with the Cincinnati Reds from 1932 to 1941. As the catcher for the Reds, Lombardi batted .300 or better 7 of 10 years. In 1938, Lombardi was league MVP while batting .342 with 19 home runs and 95 RBI’s. During that same year, Lombardi caught both of Johnny Vander Meer’s back to back no-hitters. 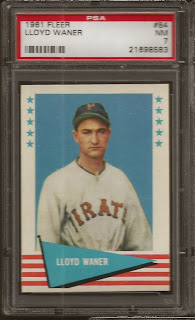 The latest card that I have added to my graded 1961 Fleer Baseball Greats set is #84 featuring Lloyd Waner. This card is graded PSA 7.

Lloyd Waner was a mainstay of the Pittsburgh Pirates outfield from 1927 through 1941. Along with his brother, Paul, the Waners gave Pittsburgh All-Star caliber players throughout the late 20’s and during the 30’s. In his rookie year of 1927, Lloyd hit .355 with 223 hits. He continued to be an offensive weapon throughout his career. His career batting average is .316 with 2459 hits. He and his brother hold the record for most hits by brothers (5611).

Lloyd was nicknamed “Little Poison”. His brother, Paul was of course “Big Poison”. The nicknames came from a Brooklyn accent pronunciation of Little Person and Big Person.

Lloyd was named to the Hall of Fame by the Veteran’s Committee in 1967. 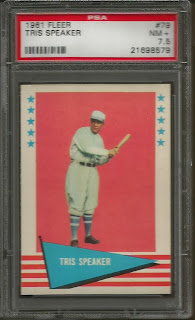 Tris Speaker played baseball from 1907 to 1928. His career matched that of many more well-known players. He had a career batting average of .344. He only hit below .300 in one season. Even with this lofty batting average, Speaker is more known for his defensive skills a an outfielder. From 1910 to 1915, Speaker was a member of the “Million Dollar Outfield” for the Boston Red Sox. The other members of this outfield were Duffy Lewis and Harry Hooper. Grantland Rice said that this was the greatest defensive outfield that he ever saw. The “Million Dollar Outfield” was broken up before the 1916 season when Speaker was traded to Cleveland. Speaker was traded by Red Sox owner Joe Lannin over a salary dispute.

In his first season with the Indians, Speaker won the batting title hitting .386. He played for Cleveland from 1916 to 1926 and is a member of the Indians Hall of Fame. Speaker also played for Washington in 1927 and Philadelphia in 1928 before end this great career. During his career he hit .380 or better five times. He also collected 3515 hit and 793 doubles during his career. Speaker was elected to the Hall of Fame in 1937.